Footballers diving and feigning injury has been done before:

but not as well as this, from Fourgrounds Films of Canada, via NPR:

If we all reacted to contact in our everyday situations like football players by a film and video production company in Niagara, Canada. http://www.fourgrounds.com

What do you get when you take 200 men, 2 poles and large green space? My new favourite game, that’s what!

I’m looking for funding to bring this to Toronto – let me and thefrontiersman know!

I’ve had a 26 year love affair with Liverpool FC but as I’ve said on Twitter, I’m quickly becoming disillusioned and am falling out of love with the club. I want to be inspired by what happens on the pitch, not disheartened. Hopefully this ownership issue can be resolved and the fans can do what we should do – support the club and revel in our victories.

A lousy World Cup for my home country, England, but a great one for media watchers. Some of my favourite headlines from before during and after the tournament:

The Sun predicts an EASY group stage. With two draws and a solitary win, it was anything but.

The New York Post gets carried away with itself:

The Star led with the glorious “Fritz All Over”

The Mirror led with the more cinematically themed “Rout of Africa”

The Sun didn’t waste any money on a fancy sub-editor, leading with the more straightforward and honest assessment “You Let Your Country Down”. 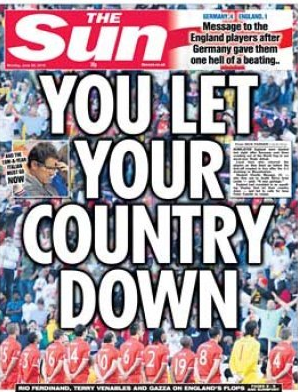 Final three headlines via the Huffington Post, via @LarysaW. If anyone cares, I’m torn between Brazil and Argentina or Germany for the cup.

John Cleese on Football and Soccer

According to Wikipedia, the term soccer originated in England, first appearing in the 1880s as an Oxford “-er” abbreviation of the word “association”, often credited to former England captain Charles Wreford-Brown.

Fernando Torres as a Cartoon Character

As an unabashed Liverpool fan, Fernando Torres is one of, if not the, my favourite players in the game right now. So when I saw that the Spanish editorial group “SM” had created a comic called ‘Fernando Torres and the Emperor’s Consul’, I had to share.

Running Up the Score

As a Brit who was raised in a hyper competitive environment, I can’t understand the North American obsession with equality and fairness. If I’m winning at something, I want to win by as much as possible – you never know when you may be able to win again so you may as well enjoy it. I also have a sneaking suspicion that I’m not the only person like this – so if the shoe was on the other foot, the opposition would want to do the same to us. Fair’s fair.

If we’re winning 8-0 and I get a chance to blast a volley on goal. I will. No need to feel guilty.

The same goes for celebrating. If I, god forbid, score a goal playing football, of course I want to celebrate. I may never get another chance.

All of which is a roundabout way of saying that I don’t understand the brouhaha about Ovechkin’s celebration of scoring 50 NHL goals. That seems like 50 more than I could score in an entire NHL career. The Guardian in the UK feels the same as me. Interesting to note the people who wanted to line up against the young Russian.

I’d rather see The Robot than a polite shake of the hands.

Please don’t get me started on the salary cap.

My favourite Olympic picture so far

I’m feeling a little stretched at work right now and I’m sad to say that playing football and generally decompressing has taken precedence over blogging. However, I couldn’t help but want to share this amazing image, courtesy of the Boston Globe, from the individual foil competition:

Giovanna Trillini of Italy and Nam Hyunhee of South Korea compete in the semifinals of the women’s individual foil fencing event at the Fencing Hall on Day 3 of the Beijing 2008 Olympic Games on August 11, 2008 in Beijing, China.

Everyone makes mistakes. If you just shook your head and thought “not me”, then you just made another mistake – possibly your worst ever.

Sometimes your mistakes are bad and they hurt you, your client, your employer, your colleagues or society at large.

Sometimes your mistakes are good and they benefit everyone.

Other times your mistakes don’t really have any effect on anyone or anything and don’t really get noticed. Those are the worst ones.

If you don’t succeed spectacularly, you should want to fail. To make a huge mistake. To have to pay for it.

A referee made a mistake in a high profile football match this weekend and cost my team three valuable points against one of our main rivals. (Or maybe we’re their main rival. It’s too early to tell.)

Some people are castigating him for screwing up.

Others are trying to work out how to ensure this doesn’t happen again.

Guess which group is (going to be) more successful?

By all means, make your mistakes. Make a lot of them. Make them early. Make them quickly.

Just make sure you learn from them. Otherwise you’re just another screw up.

As an avid footballer (I play about three times a week in the summer) and competitive so-and-so, I’m always looking for new ways to gain an unfair advantage.

As a result, I was pumped to be involved in the development of this new/social media news release on behalf of Gatorade and the Gatorade Sports Science Institute.

Here’s the gist of the release:

In advance of the 2006/07 NHL hockey season, Anaheim Ducks goalie Jean Sebastien Giguere was in search of a solution to combat the dizziness, cramping and fatigue he felt following games. After seeing a television commercial about triathlete, Chris Legh who collapsed due to dehydration 50 metres before the finish line, Giguere’s search led him to the Chicago-based Gatorade Sports Science Institute (GSSI). At the GSSI, Giguere participated in rigorous sweat test and hydration analysis, helping him overcome dehydration and perform a Stanley Cup winning season.

For the full release:

At iStudio, one of the biggest obstacles we’ve been having with the SMNR has been the enabling of comments and trackbacks – more specifically, how to provide a database to store this data in a way that is cheap and easy to install on a client’s server.

This time round, instead of building them ourselves, we decided to use some third party software and a cheeky little work-around.

For comments, we signed-up for a premium Haloscan account; for video, we used YouTube‘s fabulous “embedd” functionality and for trackbacks we set up a Technorati account for the page and linked to the “blog reactions” portion of the account.

Check out how we did for FH client, Yahoo! Canada, for The Kick, their football (or soccer for the uncivilized) Web site –

iStudio VP, Brandy Fleming, has more on the iStudio Blog: Ideas and Insights.

As an aside, I know that some people are pumped to have the major newswires on-board with enabling multimedia releases such as this, but surely one of the points of the Social Media News Release is to attract both the conversation and an amount of Google juice to the client’s site?